To create a “fog of war” effect, you need to know the trail the player has taken. In order to store that trail we’ll use an option on Godot’s ViewPort: Render Target > ClearMode. Setting Clearmode to Never makes the Viewport never erase what it has drawn. This can be used as the trail the player made through the game world. We’ll use the render from this Viewport as a mask for a shader.

In the future I’ll make a post on how to get this effect working in an Isometric game.

Create a new scene and give it the following structure:

The Sprite is what will be used to draw our path through the fog. In order to demonstrate the effect, we’ll add some code to move the Sprite:

Prepare the Viewport by adjusting these settings:

Add a blank image: Texture > New Image Texture and then edit the image and give it a size of 500x500

Add a shader to the material: Shader > New Shader

uniform sampler2D viewport will be the rendered texture from the Viewport. The value of each pixel drawn by the Viewport is read by the shader and it renders it into the TextureRect. If the value is Black (1.0) it makes that pixel opaque. If it is white it makes that pixel transparent. To pass a ViewportTexture as an argument to the shader, use the inspector and find the ShaderParams section. To add a ViewportTexture the resource needs to be set to Local to scene. You can find the option to set the resource as local in the resource dropdown of the Shader. Expand the shader param dropdown and click where it says [empty] in the viewport row. Select new VeiwportTexture and click the Viewport. 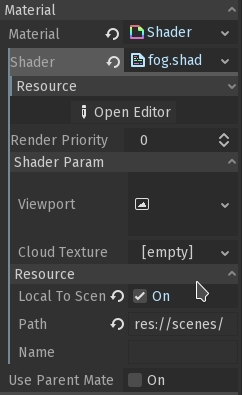 When you play the scene now, you should see a wipe effect.

It’s fairly easy to get this working for a top down 2D game. The steps you will need to take are the following:

Note that getting the size of the TextureRect is a little more complicated for an Isometric game.

I’d like to cover in more detail how to get this effect working for an Isometric game. It’s not trivial to stretch a TextureRect over the size of an Isometric tilemap because of how the map is transformed.